His Holiness the Drikung Kyabgon Thinle Lhundup, the 37th throne holder of the Drikung Kagyu Lineage and 7th reincarnation of the Chetsang Rinpoche is a manifestation of Chenrezig (Avalokiteshvara). Drikung Kyabgon Chetsang, Konchog Tenzin Kunsang Thrinle Lhundrup, was born in 1946 into the aristocratic family of Tsarong in Lhasa. Many prodigious signs and visions accompanied his birth.

His reincarnation was confirmed by a vision of the Drikung regent Tritsab Gyabra Rinpoche and through many additional divinations performed by Taktra Rinpoche (the Regent of Tibet), H.H. the 16th Karmapa, and H.H. Taklung Matrul.

In 1950 the formal enthronement as Drikung Kyabgon Thinle Lhundup took place at Drikung Thil, the main monastery of the Drikung Kagyu order. His spiritual instructors (yongzin), Tritsab Gyabra Rinpoche and Ayang Thubten Rinpoche, were responsible for his education. His curriculum included reading, writing, memorizing, astrology, and grammar. From his yongzin and from Bhalok Thupten Chodrak Rinpoche, Lho Bongtrul Rinpoche, and Nyidzong Tripa he received the basic empowerments, transmissions, and teachings of the Kagyu tradition and the Drikung Kagyu tradition in particular.

At the age of eleven, Drikung Kyabgon gave his first public teaching and transmission, a long-life empowerment, during the 1956 Monkey Year ceremonies of the Great Drikung Phowa. Subsequently he began his philosophical studies at the Nyima Changra monastic college of Drikung. Although he was four years younger he studied together with the second Drikung lineage holder, Chungtsang Rinpoche.

Before and after the Tibetan uprising of 1959, several attempts were launched to bring Chetsang Rinpoche and Chungtsang Rinpoche out of Tibet into safety. These attempts failed because of the inexorable resistance of the monastery manager. Rinpoche’s family had already fled to India in 1956.

Tritsab Gyabra, who had left the monastery some years before, took Rinpoche to live with him in Lhasa. In 1960, Drikung Kyabgon was admitted into an elementary school in Lhasa. In very short time he mastered the subject matters of several classes, being able to finish the six years of education in only three years. Thereafter he was admitted to the middle school. The subjects there included Chinese, natural sciences, history, and biology. Chetsang Rinpoche excelled in his studies, especially in Chinese. He also became a keen athlete and a passionate and brilliant soccer player.

During the Cultural Revolution, starting in 1966, classes and business came to a halt. While Lhasa sank into chaos, Rinpoche several times was saved by a fraction from certain death. In 1969, he was assigned to a commune in the countryside, where he had to carry out the hardest physical labor: Work on the fields in the spring and in summer, cutting firewood on steep mountain slopes in autumn, shovel out the sewage from the cesspits in Lhasa in the winter. Since there was no prospect for Chetsang, in 1975 he finally decided to escape. He set out alone and without help to cross the border of Tibet across high passes and glaciers. Unscathed he reached Nepal and eventually the residence of the Dalai Lama at Dharamsala. Afterwards he traveled to the USA, where his parents had in the meantime emigrated to. There he learned English, while earning his living as a part-time at a McDonald's and other restaurants.

After three years in the USA he returned to India in 1978, to take on the lead of the Drikung Kagyu Lineage as its throne holder. He entered a traditional three year retreat at Lamayuru Monastery. Chetsang Rinpoche studied with numerous highly accomplished lamas and Rinpoches of different traditions and received from them teachings and initiations. He regards Dilgo Khyentse Rinpoche as one of his most important teachers. He studied Buddhist philosophy under Khenpo Noryang in the Drukpa Kagyu monastery Sangnag Choling in Bhutan.

In 1985, Drikung Kyabgon received full monk's ordination from His Holiness the Dalai Lama, during the Kalachakra initiation in Bodhgaya. He mastered all challenges with remarkable ease. Since 1987 Chetsang Rinpoche began to give teachings in many countries throughout the world. In Dehra Dun, India, he established the Drikung Kagyu Institute, a monastery (Jangchubling) and an educational center, as well as a retreat center and the nunnery Samtenling.

In 2003 H.H Drikung Kyabgon Thinle Lhundup established near his monastery a magnificent edifice: the Songtsen Library, a center for Tibetan and Himalayan studies. With the work of the library, Rinpoche pursues his vision of the comprehensive preservation of Tibetan culture and religion. In 2005 close to the Songtsen Library, Drikung Kyabgon built a large College for Higher Buddhist Studies (Shedra), the Kagyu College.

Read more about the life of H.H. the Drikung Kyabgon Thinle Lhundup in Elmar R. Gruber's biography From the Heart of Tibet.

Generally, impermanence is just like shadow of your body under the sunlight in your day to day life, but due to self-cherishing, completely engrossed with self-comforting attitude, people tend to forget or rather ignore the reality of life and death. They are unaware of the fact that death is certain. The younger ones, in particular, are obsessed with glossy, sparkly cosmetic objects, that which even caused them sleepless nights.

To-day, because of this epidemic regardless of old or young, poor or rich, powerful or infamous, everyone learnt a good lesson on impermanence. Because of this epidemic, lot of changes occurred in the field of world’s social economics, political and military activities, and cultural events. Apparently, changes disturbed the day-to-day livelihood of common people. Particularly, people not only learnt the definition of the term
impermanence, they have been able to experience in life the real meaning of impermanence of existence, and how changes occurred instantly.

So today we are learning the meaning of impermanence by experiencing it in life.
About three months ago, you might have planned several projects, life events, they all gone in vain by now and your plans for the future are also doubtful and uncertain. You are hesitant to decide. Broadly speaking, this is an introduction to impermanence in real life situation.

Whatever religion you follow it is utmost important to cultivate impermanence in our conscious mind, which will help you to face many life adversities in a balanced manner. Since we are living in this Samsaric world, it is natural that we will face many obstacles, with the positive attitude, we will tolerate and take it as it comes, and knowing that everything existed are impermanent. Since we know the nature of the Samsaric existence we will not suffer from severe anxiety and shock when we face misfortunes, (birth, old age, sickness and death).

Once, an old German who was more than eighty years old, educated and wealthy businessman told me, ‘’I don’t understand what is the life, would you please explain it to me?’’. At that time moment I did not have an appropriate answer. This reminded me of a Tibetan country expression which goes, ‘’A light rub on old man’s cheek is as unbeneficial as treating a saddle sore of an old and unserviceable horse’’. The implication of the saying was clarified by the Great Nagarjuna. ‘’It was surprise to know that human life was totally on the basis of breathing in and out, day and night’’. Again as per an old astrologer, life and death is dependent on the breathing, at the door of nostril. To be precise inhale and exhale in a conducive environment and at the right time is a life of human. That is called living and life. According to Zoe (treasures) writings of Vasubandhu, 5th century Indian master, life is living on air heat combined with soul. 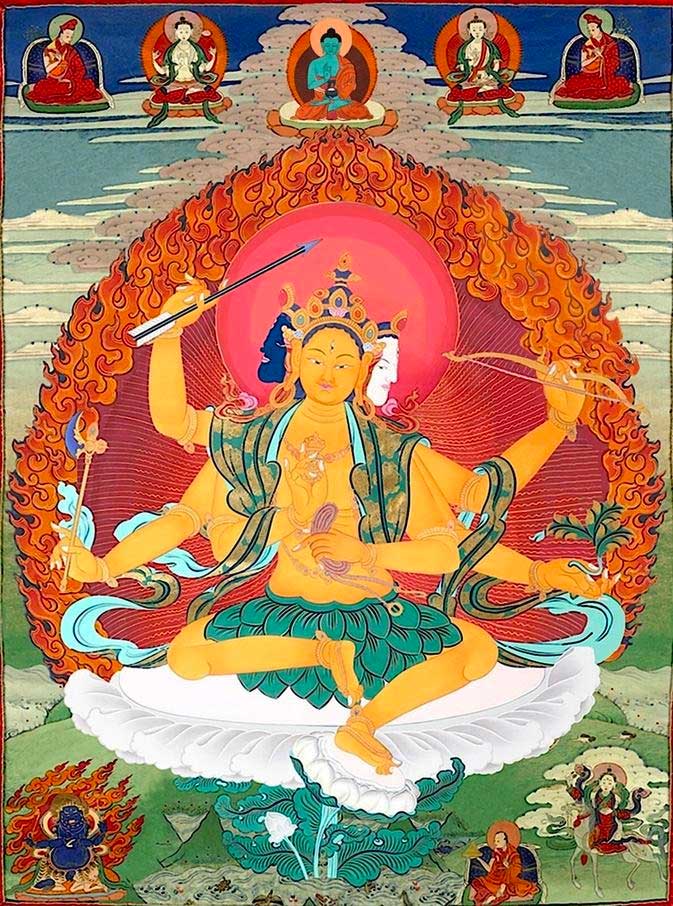 This was taken from the collected works of Drikung Kyabgon Jigten Sumgon.

Praise in Verses to the Goddess Who Eliminates All Diseases
(Parnashavari)

Out of the mandala of dharmakaya‘s great bliss
You protect aganinst dangerous diseases like epidermics
And aganinst untimely death –
I pay homage to you, the mother of wishfulfilling activities.

You, golden-colored Parnashavari, sit on a lotus seat,
Your main face is yellow, the right one blue, and the left one white
Your hair is bound up in a topknot, and you are full of splendor –
I pay homage to the devine body of the goddess granting accomplishments.

You, Illustrious One, are the embodiment of wisdom and compassion,
You stand in the midst of masses of fire, burning like at the end of time.
With your three faces and six arms, you look terribly wrathful –
I pay homage to you, whose one leg is streched and the other bend.

You, who wears a robe of leaves, hold bow and arrow.
Battle ax, and a bunch of branches.
Parnashavari, you show the threatening mudra and hold a vajra –
I pay homage to you, great mother, protectress of beings.

By this virtue, may I swiftly accomplish Parnashavari and establish all beings withous exception in her state. 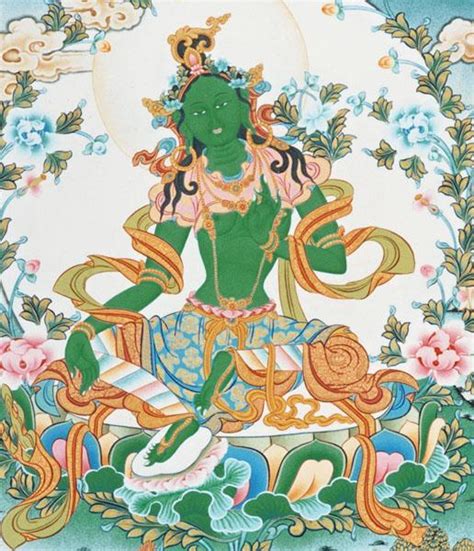 Prayers and Mantra-Recitations to Green Tara

This is an excellent antidote to diseases, negative influences, disasters, poverty, frost, drought, famine, etc.
We should recite this mantra. This is my request!