An idyllic 18th century farmstead lies embedded in the Lüneburg Heath near Schneverdingen, about 70 km south of Hamburg. Five farm houses built in the timber-framed brick nogging style typical of Lüneburg Heath farmhouses are grouped around a grove of oak trees, surrounded by meadows, woods and a nature conservancy area. This quiet, peaceful place inspired H.H. Drikung Kyabgon Thinley Lhundup and H.E. Garchen Rinpoche to create a retreat Center of the Drikung Kagyu Tradition in Germany. The Garchen Foundation acquired the farmstead in 2009, renovated in accordance with historic preservation guidelines and expanded into a Center where profound meditation can be practiced. A specially laid out path encircling the entire site invites you to take a stroll in the midst of nature. 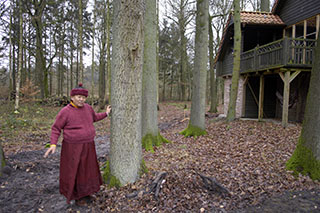 This place has been blessed at several visits by H.H. Drikung Kyabgon Thinley Lhundup, H.E. Garchen Rinpoche and other high lamas of the Drikung Kagyu tradition.
In July 2011 an Earth Blessing Ceremony was held under the guidance of H.H. Drikung Kyabgon Thinley Lhundup and Ven. Khenchen Konchog Gyaltsen at the spot where the Center’s meditation hall is now being constructed.
In October 2012, many visitors from all over the world came for the consecration of the newly-built temple under the direction of H.E. Garchen Rinpoche and for the opening of the centre.

This place was named after the great Tibetan yogi Milarepa (1040-1123), who spent many years of his life in meditation in solitary retreat on the icy mountain ranges of the Himalayas, including the three holy mountains Kailash, Lapchi and Tsari. He eventually realized Mahamudra, the Great Liberation, or enlightenment.

Since H.H. Drikung Kyabgon Thinley Lhundup has linked the place of the Milarepa Retreat Center with the blessed place of the holy Mount Kailash and because great importance will be attached here to the meditation practice of Mahamudra, Garchen Rinpoche blessed it with the Tibetan name

As the most important priorities to be pursued at this center, H.H. Drikung Kyabgon Thinley Lhundup pointed out three projects:

- Three-Year-Retreat
- Study and translation work
- Hospice (for Sangha members who want to spend their last days in a spiritual environment).

Drubpon Rachel Dodds has completed a traditional Three-Years-Retreat in the Drikung Kagyu Tradition from 2004 to 2008 in Almora India under the auspices of H.H. the Drikung Kyabgon Chetsang and H.E. Garchen Rinpoche, under the guidance of Drubpon Champa Rigzin Rinpoche. Drubpon Rachel Dodds has officially received the title „ Drubpon“ ( Meditation-Master) by H.H. The Drikung Kyabgon Thinley Lhundup.

Under her and Giorgio Savigliano's guidance the second traditonal Three-Years-Retreat with a group of four international disciples began in 2018, in 2019 two more retreatants joined, where she lead them through the 5 Fold Path of Mahamudra and the Six Yogas of Naropa.

During a summer visit of His Holiness Drubpon Rachel was officially authorized to lead Hevajra and Nairatmya Retreats from the Marpa Ngok Tradition.

The Center also provides optimal working conditions for translators who wish to concentrate undisturbed on a Tibetan text.

Retreat Center and Assignment of the Sacred Mountains in the West

Realizing the vision of a Retreat-Center in Europe
and bringing the three sacred mountains, Lapchi, Tsari and Kailash, to Europe

For many years, H.H. Drikung Kyabgon Chetsang had been considering establishing retreat centers in the West, as meditation in Himalaya regions has become increasingly difficult due to the political situation.

In 2000, this wish took concrete form, and H.H. Drikung Kyabgon Thinley Lhundup spoke for the first time with the German sangha in Hamburg about his vision of bringing the three sacred mountains, Lapchi, Tsari and Kailash, to the West.

In 2002, H.H. Drikung Kyabgon Thinley Lhundup Europe. Together with some sangha members from Hamburg he looked for suitable places in East Germany, especially in the area around Berlin. Because the right property was not found immediately, the project was put on hold. In 2007, Drikung Kyabgön Thinley Lhundup visited the stupa in Hungary. According to His Holiness' vision, this place was assigned to the sacred Mount Labchi. The search for Mount Kailash in Europe continued.

In 2007, Drikung Kyabgon Thinley Lhundup visited the stupa in Hungary. According to His Holiness' vision, this place was assigned to the sacred Mount Labchi. The search for Mount Kailash in Europe continued.

In 2012, the Milarepa Retreat Center was ceremoniously opened and on this occasion the center was assigned to the sacred Mount Kailash.